Sunday afternoon last week, my little niece and nephew, Shiva (Iva) and Nizar (Iza) visited my parent's house. Both of them dropped by their father --my cousin-- Bang Uli. When Bang Uli wanted them retuned home with him, Iva and Iza refused because they too busy playing. It's fun to watched them play, so we (me and my sister) promised Bang Uli that we will escorted them home after they finished playing, then Bang Uli returned home.

While it's still early afternoon, my sister, Lia, asked us to stop by in Taman Alun Kapuas or Alun Kapuas Park, not too far from Iva and Iza house. Me and Isna (my other niece who already a collage student) said, why not? Third of us never went there since it has been closed temporarily for some major improvements, so that's a good opportunity. 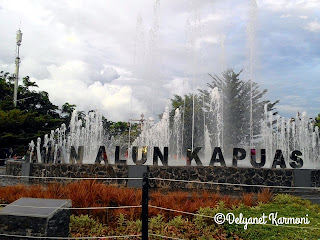 The five of us headed to Taman Alun Kapuas by 2 motorcycles. In short, we arrived at the Alun-Alun Kapuas. Unexpectedly, Taman Alun Kapuas visitors in the afternoon like that day was crowded. But it's okay for me, as long as they don't bother me or mine, I can enjoy the situation.

By the way, our city's green open space was indeed has a lot of changes. It's more organized and no illegal traders or buskers. For me, it's quite satisfy. There is a fountain with Taman Alun Kapuas big signage letter. Many visitors take turns posing in this spot, including us.


Another beautiful spots that quite eyecatcy as photo background are the garden, fountain near the river, riverbanks, and equatorial monument duplicate on the banks of the river. There is also a floating floor that gives the sensation of being on a boat. It's rocking by the river waves..

Imperceptibly, the evening arrived. Adzan (prayer calling) sounds echoed from the mosques across the river. A park officers who patrol told us to leave the park as soon as possible because the park will be closed at about 6 pm. At that time, five of us were in a floating floor. We rushed to the fence that is already half-closed.

I'm happy because we can have fun with a cheap cost or I'll say, almost free. We just need to pay the parking fee (1000 IDR). FYI, 1000 IDR for parking services is based on the Pontianak city government regulations issue. So if there are parking officers who asked for more, we can report them to the municipal police stationed in the park.

Okay, that's it for today. It's very hard writing in English, please pardon my language mistakes, my friends. Hopefully this article can be reference for you who wants to visit my lovely city, Pontianak. See you later. Bye!
at 2:33 AM